Cheap Places to Eat on the Las Vegas Strip

Categories Food and Drink, Ways To Save 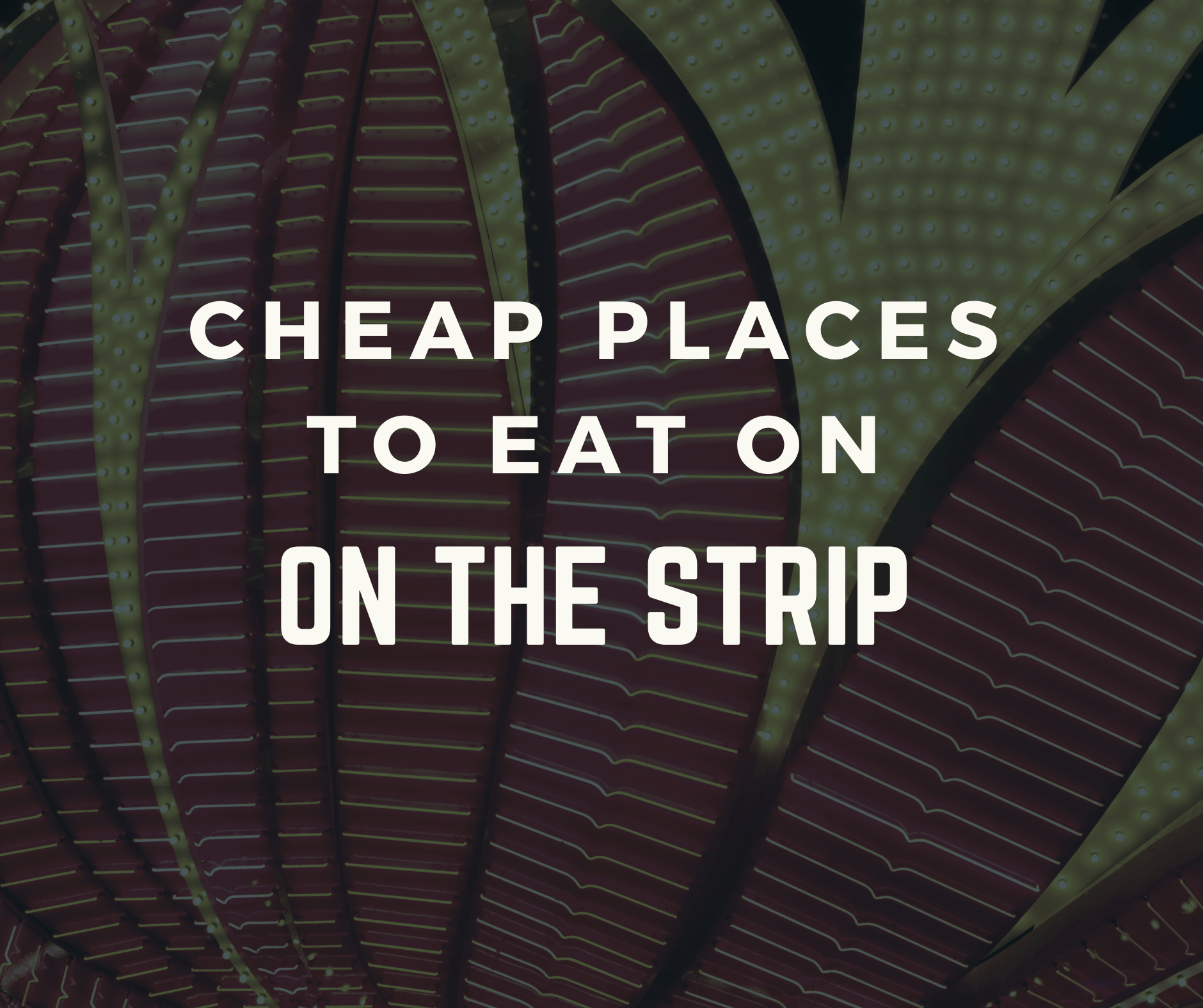 Finding ways to eat cheap in Las Vegas is an effective way to stretch your budget and conserve cash for more exciting activities, like gambling (we kid, we kid… kinda). One thing we always try to do is find cheap restaurants to eat at for breakfast and lunch and then splurge on something more upscale for dinner.

With prices for nearly everything on the Las Vegas Strip on the rise, where can you find a cheap meal anymore? Fortunately, most Las Vegas Strip resorts offer at least one budget option to cater to those looking to save money on meals.

Below, we’ll go property by property and detail restaurants where Las Vegas visitors can still eat cheap. To qualify for the “cheap eats on the Strip” list, the establishment must have meal offerings at a $10 price point or lower.

Related: Let us point you in the direction of the loosest slots in Vegas using data from the Nevada Gaming Commission.

Shake Shack: Guests can score a $5.19 burger, $3.25 hot dog, and/or french fries for under $3. Ordering a full meal will get you close to the $10 threshold we previously established to qualify as cheap, but you can get a solid lunch or snack at a relatively low price at Shake Shack. View the menu here.

See Also: Not only is Sirrico’s a cheap meal, but we also rated it one of the best slices of pizza you can find in Vegas.

Pieology Pizzaria: A differentiated offering that allows guests to build their own personal pizza by selecting and any assortment of toppings, all for just over $12. A basic cheese pizza costs only $10.

MGM Grand Food Court: With cheap, efficient meal options like Bonnano’s Pizzeria, Pan Asian Express, Tacos N ‘Ritas, Johnny Rockets, and Original Chicken Tender, there is bound to be something that is destined to hit the spot.

Subway: It’s a known quantity. It’ll never surprise you, and can be a great option if looking for a cheap meal on the Strip.

Pin-Up Pizza: Accessible from the Strip side of the property, Pin-Up pizza serves massive New York style slices. At around $7 per slice, Pin-Up makes for a cheap lunch option.

Ocean One: Located in the Miracle Mile Shops, Ocean One is one of the best spots to hit for a cheap meal on the Strip. Their $4.99 lunch menu has attracted a cult following among Vegas value seekers. For the price, the portions are large and of high quality. Cocktails at Ocean One are always 3 for 1 as well.

See Also: Where to find the best pizza by the slice in Vegas – Our power rankings.

Dirt Dog: Located in the Grand Bazaar Shops out front, Dirt Dog serves up an eclectic variety of gourmet hot dogs at a price point under $10. These aren’t your typical hot dog. With options ranging from a typical chili cheese dog to the “Pastrami Dog”, there are plenty of unique options.

Blue Ribbon Fried Chicken: Although piecing together a full meal will get you close to, if not putting you slightly over $10, guests can purchase chicken by the piece for $3.35 (drumstick), $2.55 (wing), or $6.25 (breast). Also offered are a number of chicken dogs (think hotdogs but with chicken) for under $6.

Istanbul Mediterranean: Serving gyros, shawarma sandwiches, and bowls in the Grand Bazaar Shops, most items on the menu are right at a $10 price point. A cheap meal option considering the amount of food you get for the money.

Eggslut: Cosmo is not always associated with cheap meal options, but when looking for a cheap breakfast on the Strip, Eggslut is tough to beat. With Breakfast sandwiches starting at under $10, it’s a high quality option for value seekers.

Secret Pizza: Rated as the 4th best pizza by the slice in Vegas by this blog, Secret Pizza is located down an unlabled hallway on level 3 of the property. More on where to find secret pizza here.

Related: A complete list of FREE things to do in Las Vegas.

Forum Food Court: One of my favorite spots to grab a cheap lunch on the Strip, the food court at Caesars offers a diverse set of options to include The Halal Guys, DiFara Pizza, Smashburger, Tiger Wok and Ramen, Earl of Sandwich, and TaCo. Of the options in the food court, our favorite is The Halal Guys. We always get the Gyro Bowl, and it is consistantly delicious in addition to being more than enough food for one person.

In-N-Out Burger: A fast-food burger chain with a cult following, fans can snag their inexpensive, yet delicious, burgers and fries on the Linq Promenade.

Haute Doggery: Another specialty hot dog joint with unique options, Haute Doggery’s dogs start at a $5 price point, with most specialty dogs costing around $7-$8. Haute Doggery can be found on the Linq Promenade as well.

Cafe Express: Located in the back hallway of the resort near the wildlife habitat, Cafe Express serves cheap grab and go options like $9 breakfast sandwiches, $11 salads, and pizza by the slice which costs $7 (cheese), or $8 (1 topping). The pizza by the slice is 1/4 of the pizza, so not only is it cheap, but it’s filling. A great late-night bite.

Eatwell: A small food stand located near the front entrance to the property nearest Flamingo, Eatwell offers a number of breakfast sandwiches at a $10 price point making for a quick, cheap breakfast.

Fulton Street Food Hall: Complete with a noodle bar, pizza by the slice, a live-action burger/taco station, as well as a selection of soups and salads, Harrah’s food hall has numerous cheap meal options.

Fast Food Nextdoor: Just outside the north entrance on the Strip in between Harrah’s and Casino Royale is a food court with a McDonald’s on the upper level. The bottom level offers a Chipotle in addition to Chinese and pizza by the slice options.

Food Court: Casino Royale is known for cheap gambling, cheap rooms, and cheap food right on the Las Vegas Strip. Near the back of the property is a few quick, inexpensive food options to include a Subway, a Pizza Hut, and a stand that sells foot-long hot dogs for $1.99.

White Castle: A newer addition to the property, White Castle slings sliders around the clock.

Denny’s: A popular and inexpensive chain, Denny’s at Casino Royale can offer a cheap breakfast, lunch, or dinner.

Grand Canal Shoppes Food Court: Anchored by Johnny Rockets, the food court in the Grand Canal Shops at Venetian has a number of inexpensive dining options to include a Subway, Panda Express, Chicken Now, and Chipotle.

Pizzeria Francesco’s: Selling pizza by the slice for as little as $5.95 (cheese) and up for additional toppings, a cheap lunch or snack can easily be had at TI.

Westside Deli: A selection of deli sandwiches, soups, burgers, and even breakfast items, Westside Deli’s fare is almost all priced below $10.

The Pizzeria: Guests can purchase small (8′) personal pan pizzas and a selection of hot sandwiches at Circus Circus’ Pizzeria for under $10.

McDonald’s: A tried and true go-to cheap, filling meal for many, Circus Circus comes equipped with a McDonalds in the Midway, and out front.

Other Cheap Places to Eat on the Strip

Tacos El Gordo: Even if you have yet to try it, you’ve likely seen people proclaiming Tacos El Gordo’s quality eats at a low price on social media. Located north of Wynn/Encore and across the street from Resorts World, a meal at Tacos el Gordo can easily be constructed for $10 or under.

Ellis Island: Although not directly on the Strip, it is within walking distance and offers plenty of cheap meal options. The Villiage Pub & Cafe’s menu is packed with sandwich, burger, and breakfast options under $10, and the quality you get for the money is strong! They even have a cheap $4.99 shrimp cocktail – A Vegas staple.

One last suggestion for eating cheap on the Strip is to stock your room with quick meal options from the many convenience stores like Target, CVS, and Walgreens that now line the Strip. Having sandwich construction materials and snacks at the ready in your room can help you conserve a few bucks to put towards gambling and entertainment, which is clearly more important :).

See also: 44 other easy ways to save money in Las Vegas!

If you go to circus circus The west side deli, In the back of the property towards the check in desk. Cheap meals. on average about $10.00 for the meal. Another option is the pizza stand in the middle of the casino. Cheaper pizza and other items like bread sticks and salads. Nice options.

Subscribe to receive our FREE 28 page Las Vegas guide which is full of ways to save money, ideas for things to do, and more! Delivered to your email inbox.